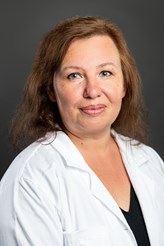 Dr. Lydia Bogomolnaya has been working in the field of microbiology for a number of years. In the past 15 years she was mainly focusing on the identification of Salmonella Typhimurium genes important for virulence in a wide range of animal models (1-3). In the course of these studies, she routinely used an extended arsenal of microbiological and molecular biology techniques, while also taking advantage of robust genetic tools available for Salmonella researchers to assign functions to previously uncharacterized genes in this bacterium. In addition, she initiated studies aimed to understand the strategies used by opportunistic pathogen Serratia marcescens to successfully colonize different surfaces (4). Recently, she became interested in understanding of physiological role of bacterial drug efflux pumps in two bacterial species, Salmonella Typhimurium and Serratia marcescens. As a faculty at Marshall University, she is currently interested in the identification of natural substrates of MacAB efflux pump in these bacteria. Identification of natural substrates of drug efflux pumps and the more complete understanding of their regulation will promote the discovery of alternative strategies to control bacterial infections.

Non-typhoidal Salmonella enterica serotypes including Typhimurium are the leading cause of bacterial food-borne enteritis in the United States. Until recently, Salmonella isolates were highly susceptible to most of the commonly used antibiotics but in the last decade the emergence of multidrug resistant Salmonella has been reported worldwide. Serratia marcescens is an opportunistic pathogen with increasing clinical importance. S. marcescens can cause meningitis, endocarditis, infections of airway and urinary tract, especially in immune-compromised patients. Efficiency of antibiotic therapy for these patients in some cases is extremely low due to the high intrinsic antibiotic resistance of S. marcescens. One mechanism for resistance of bacteria to antibiotics is through antibiotic efflux via multidrug efflux pumps. However, little else is known about the natural functions of these pumps during infection. We found that at least one pump called MacAB present in both bacterial species protects them against reactive oxygen species (ROS). We are interested in identification of natural substrates of this pump; how these substrates protect bacteria from ROS and how substrate production is regulated.  Our studies will advance our understanding of the natural functions of bacterial efflux pumps beyond excretion of antibiotics and will aid to develop alternative strategies to control bacterial infections and augment conventional antimicrobial therapy.

Project #2: Defining the role of secreted DUF1471-containing proteins in adaptation of bacteria to different environments

Bacteria are able to successfully exist in ever-changing environment. For a quick adaptation to a new niche, bacteria rely on secondary metabolites, peptides and secreted proteins. These molecules can participate in a number of important biological processes: signal transduction within population, production of new compounds (for example, antibiotics), formation of biofilms, and also play an important role in virulence. Gram-negative bacteria from Enterobacteriaceae family secrete in the environment a number of proteins containing DUF1471 domain with unknown function and a similar structure. The physiological role of these proteins in maintaining of bacterial viability remains unexplored. We hypothesize that bacteria utilize DUF1471-containing proteins as a network of signals to accelerate adaptation to a new environment. Our studies will be focused on identification of DUF1471-containing proteins needed for survival during infection and during antibiotic exposure.