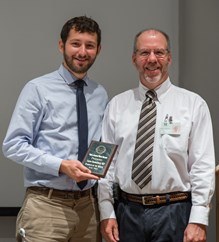 “It’s exciting to see residents take the time to nominate another resident for recognition of a job well done,” Wehner said. “Medical residents are super busy. For Dr. Brownfield to be nominated by another busy resident in a different specialty is evidence of an outstanding physician who deserves recognition.”

In his nomination letter, Daniel J. Poole, M.D., a senior resident in the department of family and community health, described Brownfield as “an exemplary doctor... able to relate to his patients well and empathize… a hard worker and a great leader.  He is willing to do almost anything for the sake of the team… his patients love him and his team members respect him greatly.”

Brownfield is a 2012 graduate of the Marshall University School of Medicine, where he was recognized for his academic achievement and community service.  He is an active participant in the Marshall Medical Outreach Program and Faith in Action of the River Cities.As an undergraduate student at Marshall University, he earned his bachelor’s degree in biochemistry and was selected as one of two West Virginia student representatives to the Family Medicine Congressional Conference in Washington, D.C.

Brownfield also participated in the “Sons of Thunder” Medical Mission in Livingstone, Zambia, where he and his wife worked in a rural health clinic.

As part of his recognition as the June Resident of the Month, he will receive items including a Certificate of Recognition and a designated parking spot.