HUNTINGTON, W.Va. — Andrew S. Martin, M.D., has been selected as the March Resident of the Month, announced 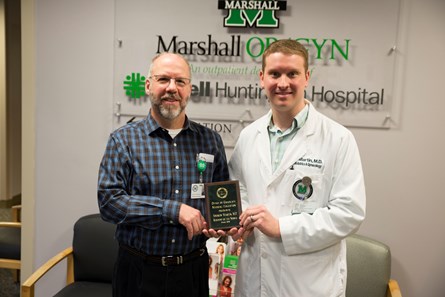 Martin is completing his third year of a four-year obstetrics and gynecology residency.

“It is always inspirational for medical students to acknowledge that one of our residents is an incredible mentor and educator,” Wehner said.  “It speaks volumes about the caliber of the resident when the nominators specifically mention a resident’s outstanding clinical skills, patient rapport and level of patient empathy.”

Martin is known throughout the program for his ability to establish a great rapport with everyone.

"Dr. Martin is an amazing young physician with a great personality and is well liked by his patients, peers and staff, said Kevin Conaway, M.D., obstetrics and gynecology residency program director.  “Andy has such an infectious smile and great demeanor that puts patients at ease and makes working with him such a pleasure.  His commitment and dedication to improving his knowledge will ensure his professional success as a physician.”

The Oceana, West Virginia, native, who completed his undergraduate and medical degrees from Marshall University, plans on entering private practice after he completes his residency in June 2019.

As part of his recognition as the March Resident of the Month, Martin received items including a plaque and a designated parking spot.