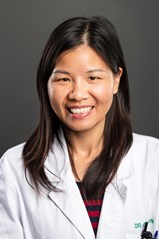 I have a long-standing interest in cerebrovascular disease research. My current research interest mainly focuses on studying the role of exercise-regulated exosomes in cerebrovascular diseases. We have recently demonstrated that exercise intervention could modulate the release and function of endothelial progenitor cell (EPCs)-derived exosomes. Given exosome function varies upon the parent cell source and status, we postulate that the declined EPC function in hypertension could affect EPC-derived exosome communications with two important brain cells (endothelial cells and neurons) which will accelerate ischemic injury in the brain. Our initial study suggests that exercise can modulate the EPC-exosome mediated communication of EPCs and neurons. My current study will explore the effects and underlying mechanisms of how exercise modulates the exosomal communications among EPCs and ECs and neurons in hypertensionassociated ischemic stroke. In addition, our group recently revealed that exercise intervention could improve endothelial function associated with alleviated inflammation and oxidative stress of perivascular adipose tissue in type 2 diabetic mice. These exciting findings prompt us to further explore the role of exercised-regulated exosomes derived from perivascular adipose tissue on diabetic vascular dysfunction and the underlying mechanism. My long-term goal is to lead a research team to establish a novel extracellular vesicle-based therapy for cerebrovascular diseases such as ischemic stroke and its comorbidities hypertension and diabetes.

Project 1. To study the role of exosomes released from endothelial progenitor cells (EPCEXs) in the beneficial effects of exercise on hypertension-associated ischemic stroke. In this project, we are using the hypertension transgene mouse model to perform exercise. We focus on studying whether exercise could modulate the communication between EPCs and two major type of brain cells (endothelial cells and neurons) in hypertension-associated ischemic stroke condition.

Project 2. To investigate the functional role of exosomes released from adipose tissue (ATEXs), especially perivascular adipose tissue, on vascular dysfunction and remodeling in diabetes. Vascular disease is one of the major complications of diabetes which affects > 23 million people in the United States. Perivascular adipose tissue (PVAT), long assumed to be only vessel-supporting connective tissue, is now recognized as the sixth “man” of the vascular system. We have recently demonstrated that exercise intervention could improve endothelial function associated with alleviated inflammation and oxidative stress of PVAT in type 2 diabetic mice. In this project, we aim to determine the role of PVAT-EXs on exercise benefits in diabetic vascular dysfunction and the underlying mechanism.

Another research interest I have is to study the role of low-dose ultraviolet B induced keratinocyteexosomes (K-EXs) in cutaneous damage in diabetes. Skin alterations occur in about 30% of people with diabetes and may be precursors of the disease. Diabetic skin tissue is manifested by impaired skin barrier, compromised blood circulation, loss of nerve density, etc. Strategies to improve vascular endothelial cell function and protect nerve alive might be able to combat cutaneous damages in diabetes. UVB is a double-sided sword, it could cause skin cancer but also has benefits such as induce the production of Vitamin D and limit diet-induced obesity and associated disorders (metabolic syndrome, vascular diseases). Since UVB only reaches the epidermis, we are interested in the roles of K-EXs induced by UVB in diabetes. In this project, we will explore the role of low dose ultraviolet B (UVB) induced K-EXs in tissue regeneration in skin tissue damage model in diabetic db/db mice.