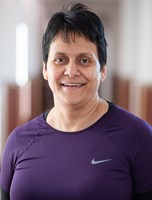 Lung cancer is the leading cause of cancer-related deaths in the USA. The death rate of lung cancer is greater than the combined death rate of breast, prostate and colon cancer.  West Virginia has one of the highest rate of lung cancers in the nation. This is due to the high rates of cigarette smoking in WV.  Nicotine is the addictive component of cigarette smoke. Studies in our laboratory try to investigate the mechanisms by which nicotine promotes the growth and progression of lung cancer.  The growth-stimulatory effects of nicotine are mediated by the alpha7-nicotinic receptor present on lung cancer cells.  We believe that our studies are clinically relevant because millions of Americans are exposed to nicotine via secondhand smoke and electronic cigarettes. Our research is also significant for lung cancer patients who use smoking cessation devices like nicotine sprays, gums and patches to quit smoking.

Our research program also explores the feasibility of nutritional interventions for the treatment of lung cancer. Capsaicin is the spicy component of chili peppers. Our published data show that capsaicin suppresses the growth of human lung cancers in cell culture and mice models. Furthermore, capsaicin also sensitizes human lung cancer cells to the pro-apoptotic effects of chemotherapeutic drugs like camptothecin.  Since, capsaicin has pungent properties, we are trying to discover second generation of capsaicin like compounds which will be non-pungent and display robust anti-cancer activity in human lung cancers

The long-term objective of our laboratory is to identify nutritional therapies against small cell lung cancer (SCLC).

Capsaicin is the hot spicy ingredient of chili peppers. It is traditionally used as an analgesic and is found in many over-the counter pain-relieving creams and lotions. Our findings were the first to show that capsaicin displayed robust anti-cancer activity in human SCLC cells.

The clinical development of capsaicin as a clinically useful anti-cancer drug is hampered by its unpleasant side effects like gastric irritation, stomach cramps and hyperalgesia.  Our current studies aim to identify novel non-pungent capsaicin analogs with improved anti-tumor activity in SCLC.

B. Capsaicin sensitized human SCLC cells to the pro-apoptotic activity of irinotecan

Cisplatin-based combination therapy is the cornerstone of SCLC therapy. Initially cisplatin produces excellent results causing remission in almost 80% patients.  However, the tumor inevitably relapses within a year and the relapsed tumor does not respond to chemotherapy or radiation. The only FDA approved second line therapy for SCLC is Camptothecin (and its derivatives) which has an objective response rate of 3% with little or no survival benefit.  Our laboratory examines the ability of capsaicin (and capsaicin analogs) to sensitize human SCLCs towards the pro-apoptotic activity of camptothecin.  The administration of a combination of camptothecin (Campto; 0.5mg/kg body weight) and Capsaicin (CAP; 10mgcapsaicin/kg food) showed a greater decrease in the growth rate of human SCLC implanted athymic mice, than either drug alone

The second-line chemotherapy drug used in the clinic (to treat SCLC) is the camptothecin analog irinotecan. Based on the “proof-of-concept” data shown the figure (on the left), our future research intends to determine the combinatorial anti-tumor activity of irinotecan and capsaicin analogs in SCLCs.

The ability of cancer to travel through the blood (or lymph) to colonize distant organs and form secondary tumors is termed as METASTASIS.  The pro-metastatic ability of primary tumors is the reason why cancer is a lethal disease.  A vital step of the metastatic cascade is the invasion of cancer cells into the basement membrane and in to blood vessels.  An important project of our laboratory is to investigate the anti-invasive and anti-metastatic activity of capsaicin and its analogs.  Spherical invasion assays demonstrate that capsaicin robustly suppresses invasion.  This assay measures the ability of cancer cells to invade from layer 1 towards layer 2 (see figure below).  Untreated A549 human lung cancer cells efficiently invade across interface line (dotted line) into the secondary Matrigel layer (A). The treatment of A549 human lung cancer cells with capsaicin strongly inhibited the invasion of human lung cancer cells into the secondary Matrigel layer (B).

Our future studies will examine the anti-metastatic activity of capsaicin and its natural/synthetic analogs in mice models of metastasis.

Lung cancer is the leading cause of cancer-related deaths in the USA. The death rate of lung cancer is greater than the combined death rate of breast, prostate and colon cancer.  West Virginia has one of the highest rate of lung cancers in the nation. This is due to the high rates of cigarette smoking in WV.  Nicotine is the addictive component of cigarette smoke. Studies in our laboratory try to investigate the mechanisms by which nicotine promotes the growth and progression of lung cancer.  One of the mechanisms by which nicotine accelerates tumor growth is by promoting angiogenesis. The pro-angiogenic effects of nicotine are mediated by the alpha7-nicotinic receptors present on lung cancer cells. Therefore, alpha-7 nicotinic receptor antagonists should suppress angiogenesis and abrogate tumor growth.

MG624 is a high affinity alpha-7 nicotinic receptor antagonist, whose pharmacological effects have been extensively studies in neuronal cells. Our studies were the first to study the anti-cancer activity of MG624 in human small cell lung cancer. The figure on the left shows the anti-angiogenic activity of MG624, as measured by rat aortic rings assay and rat retinal explant assay.  The treatment of rat aortic rings with 100nM nicotine leads to a robust network of capillaries in Matrigel (top left panel, indicated by the black arrows). When MG624 was added along with nicotine, the number of capillaries were greatly reduced (top right panel).  Similarly, nicotine induced strong angiogenic sprouting in rat retinal explants embedded in Matrigel (bottom left panel, indicated by the black arrows). The addition of MG624 potently abrogated nicotine-induced angiogenesis (bottom right panel).

B. ACh-signaling pathway as a drug discovery target in human lung cancer

The nicotinic acetylcholine receptor (nAChR) is ubiquitously expressed on all lung tissues including on fetal lung.  All lung cancer tissues express nAChR subunits. The endogenous ligand for these nAChRs is the neurotransmitter acetylcholine (ACh).  Both normal and cancerous lung cells express all the proteins of the ACh-signaling system.  ACh is synthesized in the cytoplasm of mammalian cells by the reaction of choline and acetyl-coenzyme A (acetyl-coA), catalyzed by the enzyme choline acetyltransferase (ChAT). A second route for ACh production involves the enzyme carnitine acetyltransferase (CarAT) in the lung (see figure below).

Subsequently, the ACh is packaged in vesicles by the vesicular acetylcholine transporter (VAChT) and transported to the plasma membrane, where it is released into the extracellular space by exocytosis. An additional pathway for ACh transport involves the V-ATPase containing proteolipid complex called “mediatophore” which directly releases ACh from the cytosol to the extracellular space. The released ACh binds

nicotinic acetylcholine receptors (nAChRs) and muscarinic acetylcholine receptors (mAChRs), on the target cells to execute its biological functions. The excess ACh is rapidly degraded by acetylcholinesterase (AChE) and butyrylcholinesterase (BuChE) to generate choline. The choline is then transported back to the cytoplasm by high affinity choline transporter1 (ChT1) for another round of ACh synthesis. The lung lacks ChT1 and uses choline transporter-like proteins 1-5 (CTL1-5) to bring choline back to the cytoplasm for another round of ACh synthesis.   Similarly, polyspecific organic cationic transporters (OCT1-2 and OCTN1-2) mediate the bidirectional transport of choline and ACh in and out of lung cells.

The overexpression of these cholinergic proteins in lung has raised many intriguing questions about their role in the growth of lung cancers.

Studies in neuronal systems have characterized potent agonists/antagonists towards ChAT, VAChT, CTLs and AChE. Many of these compounds are being used in the clinic for the treatment of neurodegenerative diseases. They are tolerated well in patients and have a favorable side effect profile. Our laboratory aims to repurpose these compounds for lung cancer therapy. The VAChT antagonist vesamicol potently suppressed human lung cancer tumors in athymic mouse models (left figure, panel A). The administration of vesamicol did not cause any signs of discomfort/toxicity in mice. The weights, food intake, water intake of the vesamicol-treated mice was similar to vehicle-treated mice.  Histological analysis shows that vesamicol triggered robust apoptosis in human lung cancer tumors (left figure, panel B).