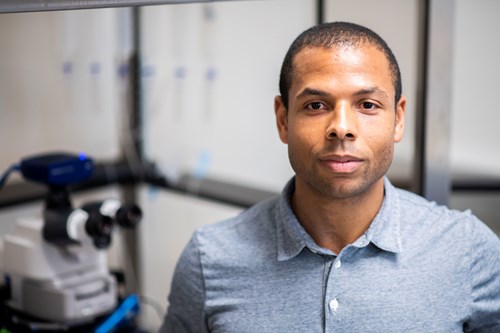 HUNTINGTON, W.Va. – Brandon J. Henderson, Ph.D., an assistant professor of biomedical sciences at the Marshall University Joan C. Edwards School of Medicine, has been awarded a Research Project Grant (R01), one of the most competitive grants issued by the National Institutes of Health (NIH).

Henderson was awarded the $1.86 million five-year grant (R01DA050717) from the National Institute on Drug Abuse to study the neurobiological and neurophysiological changes that occur due to vaping nicotine in flavored products. Henderson’s research team is working to better understand how electronic nicotine delivery systems, or vaping, alter neurobiology to trigger nicotine addiction in adolescents.

“Dr. Henderson’s R01 award represents a critical milestone in our efforts to expand Marshall’s research impact. He is exemplary of medical school faculty who are working diligently to develop innovative, exciting research to improve the lives of West Virginians,” said Joseph I. Shapiro, M.D., vice president and dean of the Joan C. Edwards School of Medicine. “Addiction poses a unique challenge to our community and Dr. Henderson’s research holds promise in creating new opportunities to fight this evolving problem.”

Nicotine addiction remains the number one cause of preventable death with an estimated 480,000 tobacco-related deaths each year, according to the Centers for Disease Control and Prevention. Vaping products are unique given the high concentration of nicotine, different nicotine formulations and flavor additives that may exacerbate addiction and increase risks for nicotine-related diseases and disorders.

“Our previous work that led to this award shows that some flavors by themselves may be addictive. Therefore, it is critical that we understand how flavors and nicotine, independent of each other or combined, change the brain and contribute to addiction,” Henderson said.

The study will implement an adolescent mouse model system that examines nicotine reward and reinforcement translatable to human vaping. The team will then use modern-day neuroscience tools to determine specific changes in the regions of the brain most impacted by addiction using fluorescence microscopes and electrophysiology.

Since joining Marshall’s faculty in 2017, Henderson has authored or co-authored 15 papers in peer-reviewed journals, presented his work nationally in 20 invited talks and has previously received R00 and R21 grants from the NIH. Henderson has been involved in nicotine-related research since starting his graduate studies at The Ohio State University and continued this throughout his postdoctoral studies at the California Institute of Technology. Many of the techniques used for studying nicotine addiction in his lab were obtained through NIH-funded training at Yale University. In addition, Henderson also serves as co-chair of the Basic Science Network in the Society for Research on Nicotine and Tobacco.

The R01 is the original and historically oldest grant mechanism used by NIH. The R01 provides support for health-related research and development based on the mission of the NIH.