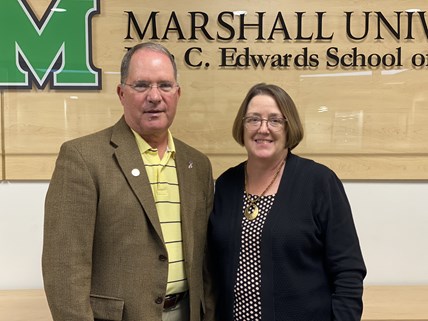 HUNTINGTON, W.Va. – The path to medical school is different for every student. For Danny M. Phillips, M.D., that journey started in 1972 with the Marion County Rescue Squad, and was solidified from 1973 to 1976 during his service in the U.S. Army. Now, he and his wife, Sandy, are giving back to the Marshall University Joan C. Edwards School of Medicine with a new endowed scholarship for veterans and first responders.

“I am a physician by the grace of God,” Danny said. “I found a mentor who pushed me and a school that accepted me. Marshall took a chance on me, and now Sandy and I are thrilled to be in a position where we can invest in future physicians.”

Danny Phillips, a Fairmont, West Virginia, native, first served as a U.S. Army Medical Corpsman for three years, followed by the West Virginia Army National Guard as a flight medic. After graduating from the Joan C. Edwards School of Medicine in 1987 and completing his emergency medicine residency at Akron General Medical Center, the path led him to a career as an emergency physician, as well as a flight surgeon for the West Virginia and North Carolina Army National Guards.

He worked as an ER physician in various hospitals in Ohio, North Carolina and South Carolina from 1990 to 2008 before he and his wife (a former ICU nurse turned chief financial officer) and another fellow physician started their own urgent care group in the Raleigh-Durham area of North Carolina. The practice, MedAccess Urgent Care, flourished to include four urgent care centers, until they sold the business in 2017.

“When we were exiting medical school in 1987, we created an annuity from our class that would serve students for years to come,” Danny said. “That always stuck with me.”

For more information or to make a gift to the Marshall University Joan C. Edwards School of Medicine, please contact Linda Holmes, director of development and alumni affairs, by phone at 304-691-1711 or by e-mail at holmes@marshall.edu, or visit jcesom.marshall.edu/alumni.