Marshall Schools of Medicine and Pharmacy receive $100,000 gift
Funds to be split evenly between programs 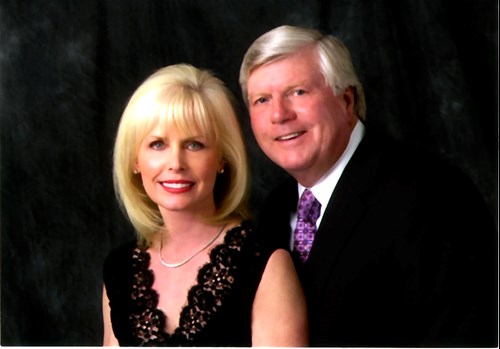 Jerry Hodge is a pharmacist and chairman of a national pharmacy services corporation.  He was recently honored with a 50-year pharmacy award by the Texas Board of Pharmacy.

“After having become acquainted with the work underway at both the school of medicine and school of pharmacy at Marshall, I have gained tremendous respect for both Joe Shapiro and Kevin Yingling,” Hodge said. “We are so pleased we can help offset some of those expenses for students and now, Margaret and I can say, We are…Marshall.”

The gift was jointly announced today by both deans. The funding will be split equally with both programs to create scholarship endowments and marks the largest private gift to date for the nearly four-year-old pharmacy school.

“This exceptional gift will have many positive effects on pharmacy education at Marshall University,” said Kevin W. Yingling, R.Ph., M.D., dean of the school of pharmacy. “Mr. Hodge’s commitment to the pharmacy profession in the United States is truly noteworthy and his support for Marshall’s program is very much appreciated.”

Joseph I. Shapiro, M.D., dean of the school of medicine, said the scholarship gift will boost efforts to reduce the crushing debt that many students incur during medical school.

“The cost of medical education is a significant burden for many of our students,” Shapiro said. “Reducing educational debt allows the next generation of doctors to choose whichever avenue of medical practice they want without being influenced by high debt.  I’m grateful to the Hodge family for helping our students.”

He and his wife Margaret have four children and seven grandchildren with another grandchild expected in May.