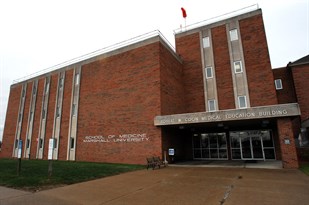 The Robert W. Coon Education Building, named for the School of Medicine's second dean who was instrumental in its planning, design and construction, is a 85,000 square foot, four-story facility constructed in the late 1970s. It is located on the beautiful hilltop campus of the Hershel "Woody" Williams VA Medical Center (VAMC) eight miles west of downtown Huntington. Constructed by the VA and leased to the School of Medicine for a nominal amount as part of the VA's commitment to the joint development of a medical school under the federal Teague-Cranston Act, it originally housed all of the school's basic science departments, classrooms and laboratories for medical student pre-clinical education, the gross anatomy lab, as well as faculty offices, research laboratories and support facilities. In 1998, a 40,000 square foot research addition was added by the VAMC behind the Coon Education Building for additional faculty research laboratories and research support facilities, some of which are occupied by School of Medicine faculty through lease and sharing agreements.

In 2007, most of the school's basic science departments and research laboratories were relocated to the then-new constructed Robert C. Byrd Biotechnology Science Center on Marshall University's main campus. However, the School of Medicine's Department of Anatomy & Pathology continues to occupy the top floor of the Coon Education Building and a number of departments share laboratory space on the second floor .

In 2012, following an extensive $8 million renovation, Coon Education Building became the home of the newly established Marshall University School of Pharmacy, providing classroom, experiential learning and study space on the lower level and first floor. In 2019, the School of Pharmacy relocated to Stephen J. Kopp Hall along Hal Greer Blvd. on Marshall's health sciences campus. This created an ideal opportunity to move the School's of Medicine's new Physician Assistant program into the academic and support spaces previously occupied by the School of Pharmacy.

In addition to the Physician Assistant program, the gross anatomy lab, human gift registry and other research facilities remain at the Coon Education Building.