Yousef selected as Fellow of the Month

Yousef selected as Fellow of the Month 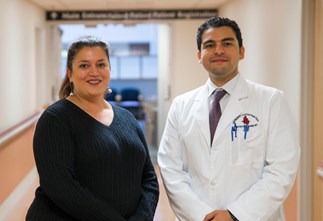 Yousef, a second-year cardiovascular fellow, was recently honored during a ceremony and commended for his care of an elderly patient.

“Dr. Yousef’s display of empathy for his elderly patient was admirable,” Wehner said. “He personally devoted several hours to address his patient’s concerns and anxieties so she would consent to a life-saving procedure.”

Haytham Aljoudi, M.D., a senior cardiology fellow nominated Dr. Yousef and wrote, “Dr. Yousef quickly realized how critical the situation was for his elderly patient and the urgency to deal with the situation so she would consent to surgery.  Through communications and multiple calls to the highest administrative levels, Dr. Yousef was able to solve the problem which alleviated the patient’s anxiety so she would agree to have the life-saving treatment.”

“It is easy for us to focus on the technical part of our job -- the imaging, the stress testing, the cath, the MRI, the CT and not concentrate on the non-medical reasons a patient is anxious,” Thompson said.  “Dr. Yousef ministered to not only to his patient’s physical needs, but to her emotional needs as well.  We are pleased that he is being honored for his humanistic approach.”

Prior to completing a three-year internal medicine residency at the Marshall University Joan C. Edwards School of Medicine, Yousef received his medical degree from Ains Shams University in Egypt.

After completing the three-year cardiovascular fellowship, Yousef will spend another year as an interventional cardiology fellow at Marshall. As part of his recognition as the September Fellow of the Month, Yousef received items including a plaque and a designated parking spot.

Photo Caption: George M. Yousef, M.D. (right), a second-year cardiovascular fellow at the Marshall University Joan C. Edwards School of Medicine, is the September Fellow of the Month.  He is pictured  with Ellen Thompson, M.D., program director for cardiovascular services.