Vo chosen as May Resident of the Month

Vo chosen as May Resident of the Month 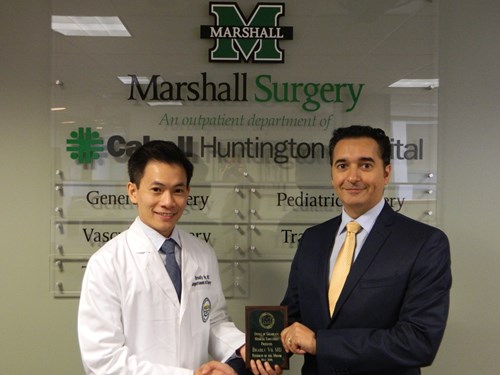 Wehner continued, “The department’s nomination said that Dr. Vo stands out among all of the residents from all of the other residents and fellows with whom they work. That in itself speaks volumes, especially for a first-year resident.”

In its nomination, the CHH Emergency Department acknowledged that Vo is “a special resident who has all the good qualities needed in a physician.  He is very kind to patients, intelligent and extremely hard working. Dr. Vo is known for his ability to handle very stressful situations and keep his cheery outlook.  He never complains even when being given a heavy work load in the middle of the night and treats all of the staff with kindness and respect. Dr. Vo is loved by all in our department.”

As part of his recognition as the May Resident of the Month, Vo will receive items including a certificate of recognition and a designated parking spot for the month.

Caption: Bradly Vo, M.D. (left) is recognized as the May Resident of the Month at the Marshall University Joan C. Edwards School of Medicine. He is pictured with residency program director Farid Mozaffari, M.D., associate professor, department of surgery.