Stuart May, M.D., Chosen November Resident of the Month

Stuart May Chosen November Resident of the Month 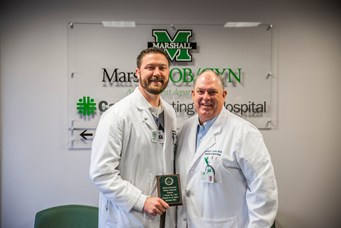 HUNTINGTON, W.Va. — J. Stuart May, M.D., a medical resident with the department of obstetrics and gynecology, has been selected as the November 2015  Resident of the Month, Paulette S. Wehner, M.D., vice dean, graduate medical education at the Marshall University Joan C. Edwards School of Medicine,  announced today.

According to Wehner, May’s nomination form said that he is “an amazing young physician with enthusiasm to spare! His great personality and professionalism make  him well liked by his patients, peers and staff. He is continually striving to improve his knowledge to become the best physician he can.  These qualities will pave the  way for a very successful career.”

May is currently completing his second year of the four-year obstetrics and gynecology residency.  He is a 2014 graduate of the Medical College of Virginia, where  he was awarded the Dean’s Merit Scholarship in recognition of his classroom accomplishments.

Outside of the classroom, he led his medical school peers in volunteering for recruiting trips, raising money for cancer research, and distributing food backpacks to participating elementary children and various other community service projects. May obtained his undergraduate degree in biology with a minor in Spanish from Randolph-Macon College, where he played varsity football for four years.  He then earned a master’s degree at Midwestern University before entering medical school.

As part of his recognition as the November Resident of the Month, May will receive items including a Certificate of Recognition and a designated parking spot.

Photo caption:  Stuart May, M.D., left, is pictured with David Jude, M.D., right, chairman of the department of obstetrics and gynecology at the Joan C. Edwards School of Medicine. May is the November Resident of the Month.