HUNTINGTON, W.Va.—Nalini Santanam, Ph.D., M.P.H., professor in the department of pharmacology, physiology and toxicology at the Marshall University Joan C. Edwards School of Medicine, has been awarded a federal grant to continue her work on obesity and aging with regard to heart disease. 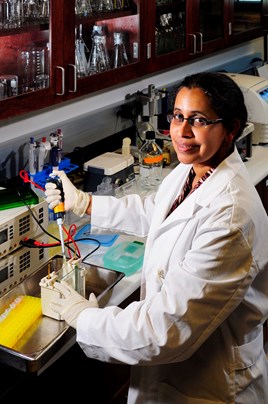 The $356,946 grant was announced last week by the U. S. Health and Human Services’ National Institute on Aging.

“Dr. Santanam is working very hard to address medical issues that are relevant to West Virginians and others in central Appalachia,” said Joseph I. Shapiro, M.D., dean of the school of medicine.  “This federal award is very important to her research program as well as our entire university.”

In congratulating Santanam on her work, Marshall University Interim President Gary White described her as one of Marshall’s finest researchers.

“Her work is indicative of the quality of faculty we have at Marshall,” White said. “Dr. Santanam’s investigations into these common health issues could very well have a significant impact on human health—both right here in our communities and around the world.”

The risk of developing obesity, diabetes and cardiovascular disease (cardiometabolic risk) increases with age.  And, according to Santanam, though the mechanisms are still unclear, these diseases are directly linked to adipose (fat) tissue dysfunction which increases with age.

“This study will investigate the role of epigenetic regulators and RNA regulatory mechanisms in adipose dysfunction with aging,” Santanam said.  “Our findings will shed light on the mechanisms that lead to age-related diseases and identify targets to treat them.”

Santanam joined the School of Medicine in 2006.