HUNTINGTON, W.Va.—Four medical students at the Marshall University Joan C. Edwards School of Medicine have been chosen by their peers to serve on the Organization of Student Representatives (OSR) to the national Association of American Medical Colleges (AAMC.)

The OSR seeks to ensure that students actively participate in their medical education and gives medical students a voice in academic medicine at both the national and local level.

The Marshall students selected for OSR are:

Brad A. Leath, a third-year medical student from Westmoreland, Tennessee

Once selected, students serve until they graduate.

“I am very excited to begin this collaborative initiative with the OSR representatives,” said Amy M. Smith, B.S.N., M.Ed., assistant dean for student affairs.   “Not only will they do an excellent job at representing our medical school on a national level, but they will also be a voice of the students and act as a resource for students and administration.”

The students hope to establish a system for professional and social cooperation and collaboration among the graduate health professions. The senate will serve to mediate the concerns that are relative to the well-being of students and ultimately collaborate on community involvement. 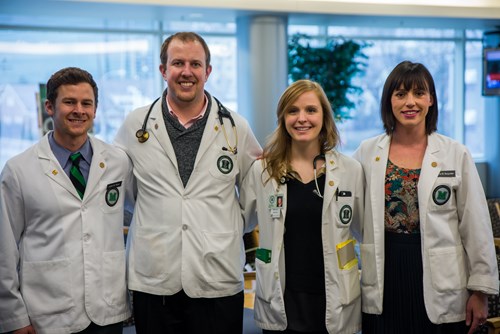 Photo caption: Students newly selected for the Organization of Student Representatives to the American Association of Medical Colleges are, from left to right, Justin Pacor, Brad Leath, Anna Clark and Lauren Burgunder.