Coon was appointed dean of the medical school in 1976, a time punctuated by uncertainty for the brand-new medical school, which had been created just two years earlier.

Characterized by many as the father of Marshall’s medical school, Coon, a native of Montana, was remembered as visionary.

"Suffice it to say Dr. Coon was truly the man for the job as Marshall was establishing the medical school in the 1970s," said Joseph I. Shapiro, M.D., dean of the school of medicine.  "In the early years, as the direction of the school was being plotted, Dean Coon provided strong, smart and sincere leadership and focused his intense energy on building a solid foundation.  We are forever grateful for his vision, tenacity and his genuine love of Marshall which led to the great school we respect and nurture today."

Charles H. McKown, M.D., longtime former dean of the medical school, said Coon was one of a handful of pivotal leaders in the creation of the school.

“It was a difficult time with unusual circumstances as Marshall forged ahead with plans for the medical school,” McKown said.  “In my estimation, no two people played a bigger role than Bob Coon and Bob Hayes (former Marshall University president). Coon’s very strong medical leadership during those critical years provided the firm, solid and appropriate foundation for the outstanding institution that serves our region so successfully.”

Coon was appointed acting dean in January 1976 following the departure of Robert C. Parlett, M.D., Ph.D., who served as the school’s first administrator for approximately 18 months.   Coon was named dean the following July and remained in the position until he retired in 1985.

The Robert W. Coon Education Building at the VA Medical Center in Spring Valley bears his name. The facility is shared by both the School of Medicine and the School of Pharmacy.

Private funeral arrangements are being planned by the family.    In lieu of flowers, the family requests gifts to the Marshall University Foundation for the School of Medicine scholarship campaign, attention Linda Holmes, 1600 Medical Center Drive, Huntington, West Virginia 25701. 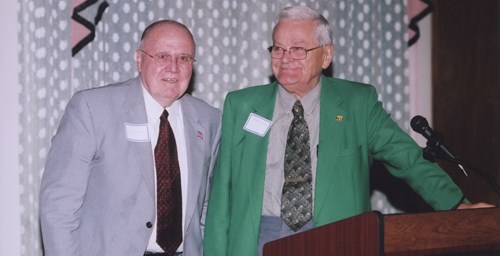