Riley Selected as May Resident of the Month

Riley Selected as May Resident of the Month

Riley is currently finishing his last (fifth) year as a chief resident in orthopaedics. 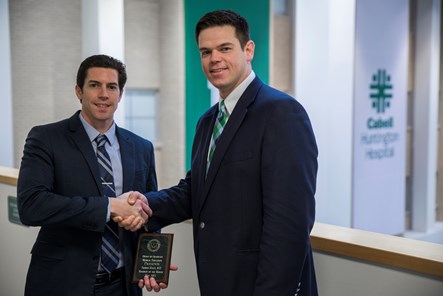 “Dr. Riley was nominated by one of his former senior residents,” Wehner said.  “To be recognized by a senior resident speaks volumes about his demonstration of exemplary characteristics.”

Jonathan Salava, M.D., was that senior resident and now serves as a faculty member and  assistant director of the residency program.  He wrote in his nomination letter, “…what sets Dr. Riley apart is his ability to be very efficient, while leaving patients, and those who work with him, with a great appreciation for his compassion   His junior and fellow seniors have nothing but respect for him.”

Riley obtained his doctor of medicine degree from Temple University School of Medicine and holds a master’s in Biological Sciences from Drexel University.  He earned his undergraduate degree from Villanova University.

While completing his studies, Riley obtained research experience at Temple University and volunteered for “America Reads,” a preschool and grade school tutoring and teaching program.

After completing his residency training next month, Riley will enter a sports fellowship in Miami.

As part of his recognition of the May Resident of the Month, Riley will receive items including a certificate of recognition and a designated parking spot.