Researchers celebrate silver anniversary together at School of Medicine

Researchers celebrate silver anniversary together at School of Medicine 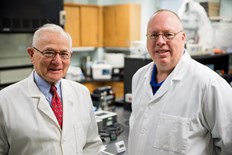 HUNTINGTON, W.Va.—For just over a quarter of a century, Ronald J. Stanek, M.S., and Maurice A. Mufson, M.D., have worked as a team in the Virus Research Laboratory, Department of Internal Medicine, at the Marshall University Joan C. Edwards School of Medicine.

Stanek received his master’s degree in biological sciences from Marshall University in 1984, and began working with Mufson five years later.  Mufsonhad been hired in the late 1970s as the inaugural chairman of the department of internal medicine at Marshall. He and Stanek set about conducting virus research in the areas of pulmonary diseases, including pneumonia and bronchiolitis in children, serious lung diseases due to respiratory syncytial virus (RSV), and pneumonia and meningitis in adults due to the most common bacterial pathogen, the pneumococcus.

“Ronald’s technical expertise quickly moved our research forward and eventually into interesting investigations on the molecular biology of the pneumococcus,” Mufson said.

Mufson began the research on the pneumococcus more than 35 years ago, 10 years before Stanek joined the effort. Mufson said he believes it is the longest continuous research on the occurrence of the bacterial pathogen in one community in the United States. Stanek and Mufson also were the first investigators to demonstrate and report that serious pneumococcal pneumonia responded significantly better to treatment with two antibiotics rather than with one.

“My achievements were only possible through the exceptional mentoring from Dr. Mufson,” Stanek said. “Our years together in the lab have been good ones.”

Stanek has authored dozens of publications and abstracts in peer-reviewed scientific journals and has presented his research findings at numerous international and national scientific meetings.

Mufson now serves as professor and chairman emeritus of the department of internal medicine.