Pitsenbarger chosen as January Resident of the Month

Pitsenbarger chosen as January Resident of the Month 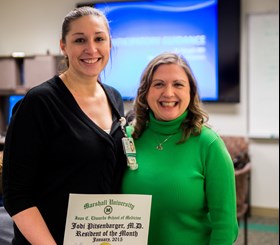 Pitsenbarger, a West Virginia native, also is currently serving as the chief resident and is the first chief to be selected by peers in pediatrics.  Historically, pediatric chief residents have been chosen by faculty.

“We had a lot of fantastic nominees this month,” Wehner said.  “It was a difficult decision given the caliber of all of the nominees.  But what really set Dr. Pitsenbarger’s nomination apart from the others is that she is such a consummate professional in so many different areas.  Her demonstrated leadership as a chief resident and true compassion for her patients deserve recognition and we commend her for her efforts.”

In her nomination of Pitsenbarger, Susan L. Flesher, M.D., residency program director for pediatrics, described her as an excellent role model.

“She goes above and beyond in assuring that she is fair to all our residents, taking into account each person’s scheduling request, and then making sure she shows no favoritism.  Dr. Pitsenbarger often schedules herself to work undesirable shifts around weekends or holidays in order to fulfill as many scheduling requests as possible.  I can always count on her to maintain all sensitive issues in complete confidentiality,” Flesher said.

Pitsenbarger is a 2012 graduate of the Joan C. Edwards School of Medicine and is a native of Franklin, in Pendleton County.   She also holds an undergraduate degree in biomedical sciences from Marshall University.  Pitsenbarger intends to enter general pediatrics upon completion of residency in late June.

As part of her recognition as the January Resident of the Month,  Pitsenbarger will receive items including a certificate of recognition and a designated parking spot.  Monthly winners also will be automatically entered into the Resident of the Year Award to be announced in May.