Perrin selected as January Resident of the Month 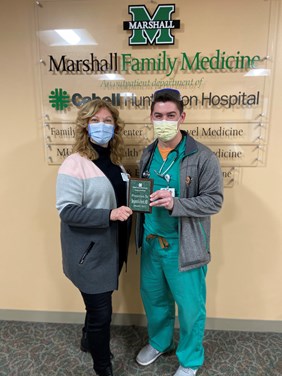 HUNTINGTON, W.Va. – Family Medicine Resident Benjamin A. Perrin, M.D., has been named the first resident of the month for 2021 at the Marshall University Joan C. Edwards School of Medicine, announced Paulette S. Wehner, M.D., vice dean for graduate medical education at the school.

“It is fitting to start off the New Year by recognizing Dr. Perrin as January’s Resident of the Month,” Wehner said. “His positive attitude and leadership skills coupled with his commitment to his patients and fellow residents have been demonstrated multiple times during this pandemic. When others on his team were quarantined, Dr. Perrin served as the only senior on a busy hospital service on two separate occasions. Despite the hectic schedule and extra responsibilities, he still maintained a positive attitude while providing patient care and support for the junior residents and medical students.”

Tammy Bannister, M.D., family medicine residency program director, echoed Wehner’s comments. “Dr. Perrin has been nominated by his peers as he is an excellent team member and colleague,” she said. “His efforts to step up and help out others is greatly appreciated. It is always nice to recognize those who go above and beyond especially in this particularly difficult time in medicine - and Ben certainly deserves it.”

Perrin, an Alabama native, received his undergraduate degree from Birmingham-Southern College in Birmingham, Alabama. He then relocated to Huntington to earn his Doctor of Medicine from the Joan C. Edwards School of Medicine. He completed a year of obstetrics and gynecology training at Marshall prior to transitioning to family medicine.

After completing his residency in June 2021, Perrin plans to remain in the Huntington area to practice emergency medicine. As part of his recognition, Perrin received a plaque and designated parking spot.