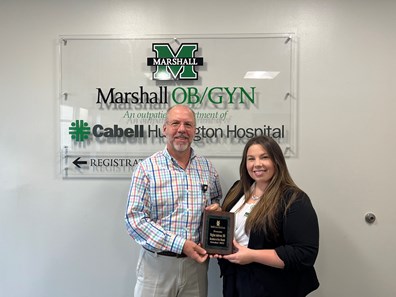 Ally Roy, M.D., associate program director, nominated Anderson on behalf of the entire obstetrics and gynecology faculty. In her nomination, Roy said “Dr. Anderson encapsulates what being a great resident and physician means. She is always contributing to the team and never hesitates to admit a patient, perform a procedure or see patients in triage. Dr. Anderson is one of the most hardworking physicians I have had the pleasure to train.”

“To have a resident nominated by the entire faculty speaks volumes of the caliber of the trainee,” Wehner said. “Dr. Anderson’s positive attitude, excellent bedside manner coupled with her hard work were duly noted by all and we are pleased to reward her with this honor.”

According to her program director, Kevin Conaway, M.D., “Dr. Anderson is not only a good physician, she is the resident that her peers look to for assistance. She is always willing to pitch in and help out and among the most reliable residents in our department. She is definitely worthy of the recognition as Resident of the Month.”

As part of her Resident of the Month recognition, Anderson received a plaque and designated parking spot. After completing her training in June 2024, Anderson plans to practice in a community closer to her hometown of Keyser in the eastern panhandle.