Murphy Recognized As June Resident of the Month

Murphy Recognized As June Resident of the Month 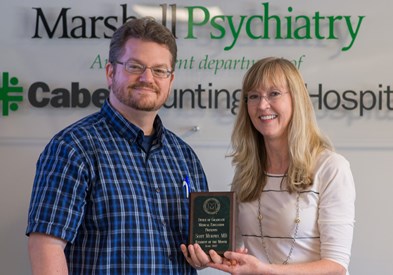 “It’s an honor to recognize our first psychiatry resident as a Resident of the Month,” Wehner said.  “Dr. Murphy is well known for his humanistic approach to patient care and for being an excellent educator to medical students.”

Murphy is a native of Martin County in eastern Kentucky and received his undergraduate degree from the University of Kentucky.  He earned his medical degree at Marshall and completed his first year as a psychiatry resident at West Virginia University-Charleston Division (CAMC).  He is in the third year of the four-year psychiatry residency and was nominated by Suzanne Holroyd, M.D., department of psychiatry chair and program director.

”Dr. Murphy is an exceptional resident, which I say with confidence having been involved in residency education for over 25 years,” Holroyd said in her nomination letter. “He always puts patients and families first. He has a wonderful way with them and can put even the most difficult patients at ease.”

He was voted by medical students for the Gold Humanism in Medicine Resident Award last year, a recognition that honors medical students and professionals for demonstrated excellence in clinical care, leadership, compassion and dedication to service.

As part of his recognition as the June Resident of the Month, Murphy received items including a plaque and a designated parking spot.

After finishing his residency next year, Murphy plans to join the department of psychiatry faculty.