Muafa recognized as June Resident of the Month

Muafa recognized as June Resident of the Month 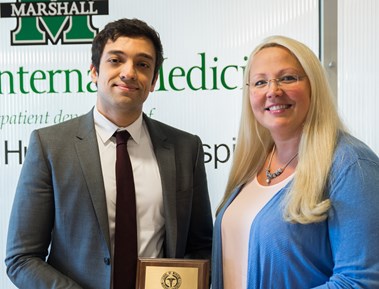 “Dr. Muafa’s nomination was the first time medical students took the initiative to join together and nominate someone,” Wehner said. “Recent graduates Indy Bhavsar and George Banks led the Class of 2016’s effort to speak very highly of Dr. Muafa and his willingness to teach by engaging the students with probing questions.”

“He has an amazing ability to make a team feel relaxed even under tremendous stress,” Patton-Tackett said. “He is able to handle a very busy service with multiple admissions all while being calm and relaxed and never complaining. You will always see him smiling and he always takes extra time to teach and interact with the students even if he is exhausted or busy.”

Muafa graduated with honors from Tripoli Medical School and is completing his third and final year as an internal medicine resident. After graduation later this month, Muafa will become a hospitalist at the Lowell General Hospital in Lowell, Massachusetts.

As part of his recognition as the June Resident of the Month, Muafa will receive items including a certificate of recognition and a designated parking spot for the month.