Melissa A. Rowe, M.D., recognized as October Resident of the Month

Melissa A. Rowe, M.D., recognized as October Resident of the Month 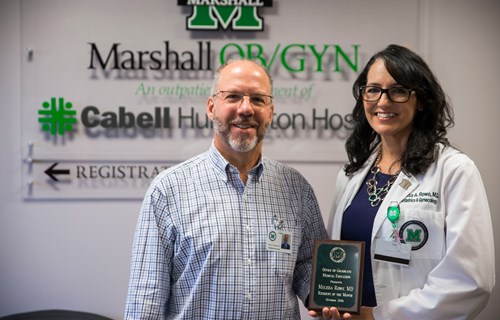 Rowe is currently completing her final year of a four-year obstetrics and gynecology residency program.

“Dr. Rowe was nominated by an adjunct clinical faculty member who watched her grow from year to year into an outstanding resident and surgeon,” Wehner said. “The nominator spoke of how Dr. Rowe is an outstanding chief resident who continues to help him with very difficult cases.”

Kevin J. Conaway, M.D., obstetrics and gynecology residency director added,“We are very pleased that Dr. Rowe was recognized by our clinical faculty for her dedication and hard work. It is gratifying to see the development of our students and residents into caring and competent physicians.”

Rowe, who also has a nursing degree, graduated from the Marshall University Joan C. Edwards School of Medicine in 2013.  As a medical student, she received honors including induction into the Alpha Omega Alpha (AOA) Honor Medical Society and the Gold Humanism Honor Society.

Rowe plans to enter practice upon completion of her residency program in June 2017.

As part of her recognition as the October Resident of the Month, Rowe received items including a certificate of recognition and a designated parking spot.

Caption:  Melissa A. Rowe, M.D., October Resident of the Month, is pictured with Kevin J. Conaway, M.D., residency director for the obstetrics and gynecology program.