HUNTINGTON, W.Va. - Lawrence M. Wyner, M.D., has been named the 2018 recipient of the American Urological Association’s (AUA) Earl Nation Retrospectroscope Award, one of the professional organization’s most prestigious honors that celebrates the preservation of urologic history.

Wyner, a urologic surgeon with Marshall Health and professor in the department of urology at the Marshall University Joan C. Edwards School of Medicine, earned the award based on his presentation at the 2018 AUA annual meeting in San Francisco on the 2017 reappearance of a set of anatomical drawings related to a controversial 1950s-era prostate cancer study known as the Bowery Series. Wyner addressed the significance of the landmark study by urologist Perry B. Hudson, M.D., that looked at whether early-stage prostate cancer could be effectively identified and cured. 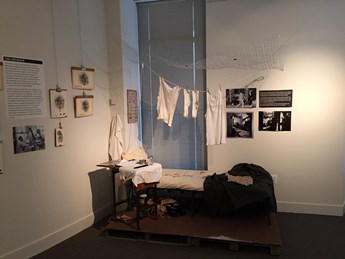 “The story of the Bowery men needs to be told, mainly because there is no one left to speak for them,” Wyner said. “Dr. Hudson believed that prostate cancer could be curable if caught early enough. He also became very skilled at one particular surgical approach to the prostate known as the perineal approach, for removing the prostate. Whether his subjects fully understood the potential outcomes (possible removal of the entire prostate if they had cancer, along with aggressive male hormone deprivation) remains controversial.”

Wyner was selected for the 2018 award by the AUA History Committee, and also curated an exhibit of the original anatomical drawings of the men in the Bowery study and a model “flophouse” bedroom last year at AUA Headquarters in Baltimore. His work was also published on April 2, 2019, in the Journal of the American Medical Association (JAMA).

“Dr. Wyner is an insightful and innovative medical historian,” said James C. Jensen, M.D., professor and chair of the Department of Urology at the Joan C. Edwards School of Medicine. “His contributions to the history of medicine and to the history of urology, in particular, are remarkable.”

Wyner will be recognized at the American Urological Association’s annual meeting in Chicago in May.

Drawings of Wyner’s exhibit of a 1950s era “flophouse” are now catalogued at the AUA Didusch Museum of Urologic History in Baltimore, Maryland.