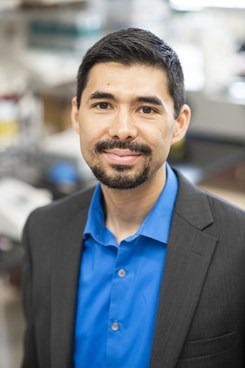 Risher, an assistant professor in the Department of Biomedical Sciences, received a NARSAD Young Investigator Award from BBRF in 2018. The two-year, $70,000 grant award funds his research investigating potential long-term brain abnormalities that arise as a result of substance use (particularly opioids) by pregnant mothers. Thus far, Risher and his team have found that brain regions associated with addiction and reward have increased connectivity in mice born to mothers that were given opioids during pregnancy. Furthermore, these structural changes may relate to the development of addiction-like behavior later in life. These findings have recently been presented at WVa Recovers, a community outreach symposium on substance use disorder and recovery hosted by West Virginia Wesleyan College, and the Society for Neuroscience Annual Meeting in Chicago, where Risher’s work was selected as one of this year’s “Hot Topics” (of which only about 100 out of the nearly 14,000 submitted abstracts are chosen).

Researchers who have received a Young Investigator Award may be sponsored for the Research Partner Program by a donor after members of the BBRF Scientific Council have conducted an independent peer-review of all the submitted applications and have recommended that award for special recognition. For Risher, this means that his work is seen as timely, highly meaningful and potentially capable of bringing about significant advances in the field of addiction research.

“This support from my peers, the BBRF and the John and Polly Sparks Foundation is extremely validating for a scientist early in his career,” Risher said. “I strongly believe in the work we’re doing at Marshall regarding the consequences of NAS, particularly because it is an issue so relevant to the local community. It’s highly reassuring to know that others in my field agree.”

Risher joined the Marshall faculty in March 2018. Since that time, he has authored one primary research manuscript as well as several review manuscripts for publication, presented his work at two regional/state and five international scientific meetings, and mentored an M.D./Ph.D. student. In addition to their work with rodent models, Risher’s group has also begun using three-dimensional brain “organoids” derived from human umbilical cord blood to investigate the effects of early life drug exposure on human brain connectivity.