HUNTINGTON, W.Va. – Marshall University Joan C. Edwards School of Medicine fourth-year students learned today at the stroke of noon where they will spend the next few years of their training during the National Resident Matching Program’s (NRMP) annual Match Day.

The NRMP pairs graduating seniors with graduate medical programs across the country where they will train for the next three to five years. In all, 58 seniors were placed in programs ranging from family medicine and pediatrics to orthopaedic surgery and emergency medicine.

“We are extremely proud of these soon-to-be graduates,” Smith said.  “They will be heading to specialty programs at Dartmouth, Emory, Hershey Medical Center and the University of Chicago, as well as well-respected primary care residencies here at Marshall University and West Virginia University.”

Four Marshall seniors also matched earlier this year in the U.S. Military Match, which placed them at Walter Reed National Military Medical Center and Eisenhower Army Medical Center, among others.

Approximately half the class will enter fields defined as primary care in West Virginia--family medicine, internal medicine, obstetrics/gynecology and pediatrics--continuing Marshall’s mission of educating physicians for the nation’s rural areas. In addition, about 24 percent will continue their training in West Virginia.

The residency match process begins in the fall for applicants when they apply to residency programs. The applications are reviewed and candidate interviews are conducted through the fall and early winter.  Following interviews, generally in mid-winter, applicants submit to the NRMP their rank order lists and programs rank applicants in order of preference. A computerized algorithm is used to match applicants with programs using the preferences expressed on their ranked lists. 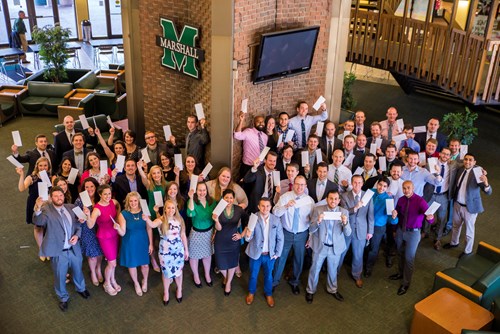