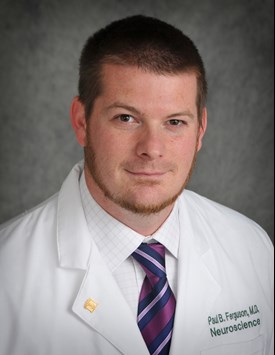 HUNTINGTON, W.Va.—Paul B. Ferguson, M.D., a 2007 graduate of the Marshall University Joan C. Edwards School of Medicine and a board-certified neurologist, has been named chair of the department of neurology, announced Joseph I. Shapiro, M.D., dean of the School of Medicine.

Ferguson has been serving as interim chair of the department since July 2015.

“After a formal search was conducted for the position, the search committee enthusiastically recommended Dr. Ferguson be named as chairman,” Shapiro said. “He has done an outstanding job in the interim position and I’m sure he will continue to do a great job moving the department of neurology forward.”

A specialist in general neurology as well as multiple sclerosis, treating adults and adolescents, Ferguson joined the School of Medicine as a faculty member in 2011 after completing a residency in neurology at Marshall and Wake Forest University.

In addition to his role as chair, Ferguson serves as the director of clinical medical student education for the School of Medicine.