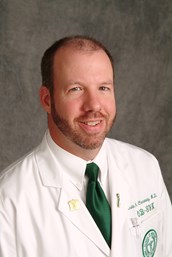 HUNTINGTON, W.Va. - Dr. Kevin J. Conaway, an associate professor in the department of obstetrics and gynecology with the Joan C. Edwards School of Medicine, has earned certification by the American Board of Obstetrics and Gynecology in Female Pelvic Medicine and Reconstructive Surgery (FPMRS), making him the only such credentialed physician in Huntington.

Often referred to as "urogynecology," the subspecialty involves care of urinary tract dysfunction and disorders resulting from loss of support of the pelvic structures.    Specifically, Conaway treats patients for pelvic organ prolapse and urinary incontinence with surgical and non-surgical interventions.   The National Institutes of Health estimates one-third of women in the United States will experience pelvic disorders in their lifetime.