HUNTINGTON, W.Va.— Sixty-seven fourth-year medical students at the Marshall University Joan C. Edwards School of Medicine were notified today where they will spend the next three to seven years of training during the annual “Match Day” program. 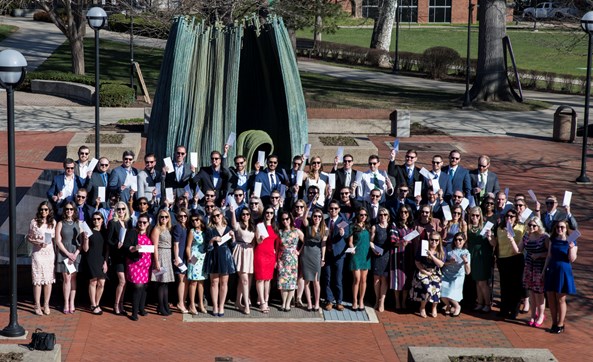 Often described as one of the most momentous days in the life of a medical student, Match Day, coordinated by the National Residency Matching Program (NRMP), uses a complicated algorithm that pairs the preferences of applicants with the preferences of residency programs, resulting in a best result for graduating students.

“Match Day is a high point for medical students as it marks the start of residency training, where they will ultimately become independent physicians," said Joseph I. Shapiro, M.D., dean of the School of Medicine. “We certainly share their excitement as they are notified of their residency matches.”

“Our students make us proud every year,” Smith said. “From competitive programs at John Hopkins and Penn State to the University of Arizona, our students did well.”

Marshall students also were represented in this year’s military match that occurred late in 2017.  The following individuals will continue their military commitments with medical residencies:

One student, Christian Warner, participated in the San Francisco Specialty Match earlier this year for ophthalmology.  He will train at West Virginia University in Morgantown.

Preliminary figures show 17% of the class will stay in West Virginia for their graduate training. According to the NRMP, this year’s national match is the largest on record.

View the complete match list for the Class of 2018 at https://jcesom.marshall.edu/news/musom-news/2018-match-list/.