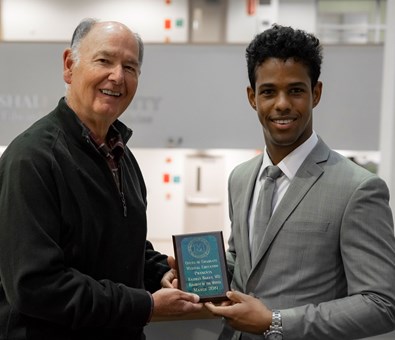 Barry is completing his fifth and final year of the surgery residency at Marshall. He was nominated by multiple nursing, residents and attendings for his teaching ability, clinical skills and bedside manner, even in stressful clinical situations.

“Surgery residents in general are hard workers,” Wehner said. “What set aside Dr. Barry’s nomination from others’ is his ability to maintain a positive and caring approach with staff and patients while serving as an exceptional teaching role model. Despite his chaotic schedule, Dr. Barry has also proven himself as an accomplished researcher with more than a dozen national presentations, 14 published articles, one book chapter and two research grants.  This is an amazing feat for a busy surgeon!”

Barry was selected by his peers to serve as Education Chief Resident for his program.  As such, he reorganized the surgery residency curriculum and helped his fellow residents identify weak areas in their knowledge base to devise individual study plans in preparation for the Surgery in-service examination.

Former Surgery Program Director Farid Mozaffari, M.D., FACS praised Barry as being one of the “best surgery residents he has ever worked with.  He is very professional, courteous, motivated, enthusiastic and compassionate.”

“It is an honor to have Dr. Barry selected as Resident of the Month,” said David A. Denning, M.D., chair and the department of surgery and current residency director. “He is professional in his dealings with patients and their families and tries to enrich the lives and well-being of others.  He is a great teacher to our clerkship medical students and our junior residents. Dr. Barry approaches difficult situations with integrity and calm, which helps him handle critical situations with poise.  He is not only very bright but works hard for his team and his patients.”

The Kingston, Jamaica, native graduated with Bachelor of Medical Sciences and Doctor of Medicine degrees from the University of the West Indies. He completed a preliminary year in General Surgery at the Mayo Clinic in Rochester, Minnesota, prior to coming to Marshall. After completing his surgery residency in June, Barry will head to Vanderbilt University to complete an extremely competitive three-year Plastic and Reconstructive Surgery Fellowship.

As part of his recognition as the March Resident of the Month, Barry received a plaque and designated parking spot.