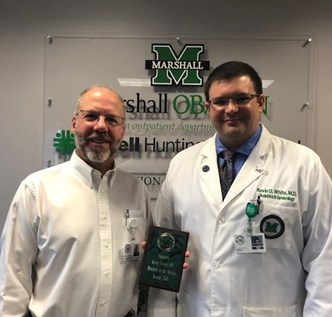 White is completing his final year of the four-year obstetrics and gynecology residency program. He was nominated for the Resident of the Month award by Joseph DeRosa, D.O., of Valley Health Systems.

“It isn’t often that a volunteer faculty member commends a resident for going ‘above and beyond the call of duty’,” Wehner said. “We appreciate Dr. DeRosa recounting to us about Dr. White’s dedication and commitment to his patient to stay and assist with a delayed surgical case.”

Prior to his obstetrics and gynecology residency, White completed his undergraduate and medical school degrees at the University of Kentucky.  The Lexington, Kentucky, native plans on entering private practice after he completes residency in June 2019.

“Dr. White has shown a willingness to provide care to his patients beyond his assigned duties—going the extra steps necessary for continuity,” said Kevin Conaway, M.D., obstetrics and gynecology residency program director at the Joan C. Edwards School of Medicine. “He will continue to provide excellent care to his patients after he graduates.”

As part of his recognition as the August Resident of the Month, White received items including a plaque and a designated parking spot.