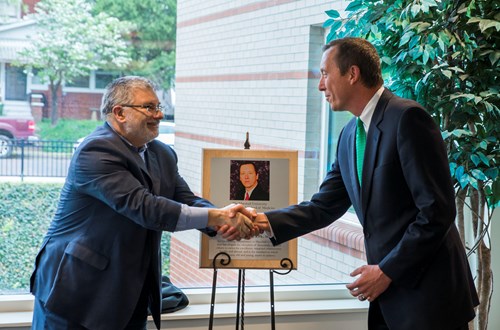 HUNTINGTON, W.Va. — Kevin W. Yingling, R.Ph., M.D.,  former chairman of the department of internal medicine at the Marshall University Joan C. Edwards School of Medicine and the inaugural dean of the Marshall University School of Pharmacy, was recognized this week with the dedication of an educational room at the Byrd Clinical Center in his honor.

Yingling, who graduated from the Marshall University School of Medicine in 1985, has been a member of the faculty since 1990.  He was named acting chair of internal medicine in 2000 and chair in 2001, where he served  until 2011 when he accepted the position of inaugural dean of the school of pharmacy.

In announcing the dedication at a brief ceremony Monday, internal medicine chairman Mehiar El-Hamdani, M.D., praised Yingling for his honorable service and dedication to both the school of medicine and his patients.

“Dr. Yingling will long be remembered at the school of medicine for his wealth of knowledge and ethics, humbleness and professionalism, as well as being inspirational and a role model,” El-Hamdani said.  “His positive attributes reflect on all including students, residents, physicians and the community at large.  His successes surpass our area to the national and international communities.”

Though he will retire as founding dean at the school of pharmacy in June, Yingling will continue the medical practice he has maintained at Marshall for more than 25 years.

“I am very humbled to have been honored in this way,” Yingling said.  “Recognition of the earnest and consistent work to make a difference in the education and training of various students and residents over many years is a highlight in my journey.”

Photo: Dr. Kevin Yingling (right) is congratulated by Dr. Joseph Shapiro, dean of the Marshall University Joan C. Edwards School of Medicine, for being recognized with the dedication of an educational room at the Byrd Clinical Center in his honor.