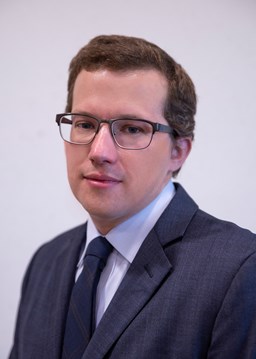 HUNTINGTON, W.Va. – Price E. Dickson, Ph.D., an assistant professor of biomedical sciences at the Marshall University Joan C. Edwards School of Medicine, has received a $407,000 grant from the National Institutes of Health to study the genetic and genomic mechanisms driving the relationship between social reward and cocaine addiction.

During the two-year R21 grant, Dickson and his research team will study the genetic and genomic mechanisms driving social reward and the preference for a social reward over a drug reward. Social rewards refer to the reinforcing social stimuli that individuals experience during interactions with others. A strong drive to seek out social interactions rather than drugs of abuse may confer addiction resistance, whereas the absence of this drive may result in addiction vulnerability, Dickson explains.

"Despite the importance of social rewards in addiction, the genetic mechanisms underlying variation in the preference for a social reward over a drug reward have been unexplored," Dickson said. “Because the mouse genome is very similar to the human genome, genetic studies using mice can provide valuable information about the genetics underlying human addiction."

To model the vast genetic diversity in humans, the team will use mice from the Collaborative Cross mouse panel, which contains almost all of the genetic diversity present in both wild and laboratory mice. To identify the genetic mechanisms underlying the preference for social interactions rather than addictive drugs, individual Collaborative Cross mice will have the choice to intravenously self-administer cocaine or to briefly interact with another mouse. Single-cell RNA sequencing will then be used to identify genetic signatures associated with these preferences in the reward circuitry of the brain.

“The successful completion of this project will provide a foundation for future deep characterization of identified genetic mechanisms driving the preference for a social reward over a drug reward in mice and contribute to the development of novel, more effective addiction treatments, Dickson said."

Since joining Marshall’s faculty in 2020, Dickson has authored or co-authored four publications in academic journals and four presentations at scientific conferences. He is a recipient of a 2020 K99/R00 program grant from the National Institute on Drug Abuse to further his research on the genetic relationship between stress and addiction. Dickson joined the School of Medicine faculty in June 2020, following seven years of postdoctoral research at the Jackson Laboratory in Bar Harbor, Maine.