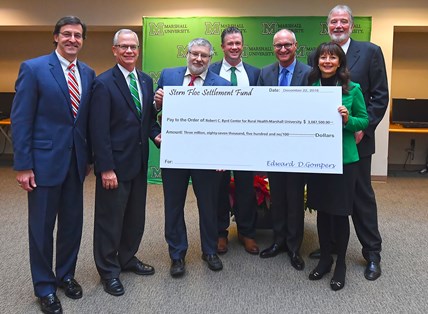 HUNTINGTON, W.Va. – More than six million dollars remaining in a court settlement account has been transferred to Marshall University and West Virginia University.

The funds were split equally between the Blanchette Rockefeller Neurosciences Institute (BRNI) at WVU and the Robert C. Byrd Center for Rural Health at Marshall under a court order issued by Judge David W. Hummel of Marshall County, West Virginia, in late November. The order ended a decade-long class action court case, William K. Stern, et. al. vs Chemtall, Inc., et al.,  which, according to court documents, sought and obtained medical monitoring for coal preparation and waste water treatment workers who had been exposed to a chemical neurotoxin.

At Marshall, funding will be used to continue work in rural health, specifically tackling barriers like isolation that many rural providers and rural people encounter. These efforts are coordinated through the Center for Rural Health in concert with Marshall’s department of family and community health and other primary care departments.

“With modern technology and these resources, we can go a long way to ensure better access to health care for our citizens in southern West Virginia and beyond,” said Jennifer T. Plymale, M.A., director of the Byrd Center for Rural Health. “Additionally, we can build on innovative educational efforts that have been successful in graduating quality primary care physicians practicing in areas of need throughout West Virginia and the surrounding Appalachian region, as well as continuing our work with community partners on the center’s outreach endeavors that are designed to encourage the development of new and innovative health care delivery systems in rural communities that lack essential health care services.”

“This is a wonderful opportunity for the rural health program at Marshall University which resides in our department of family and community medicine,” said Joseph I. Shapiro, M.D., dean of the Joan C. Edwards School of Medicine. “I have absolute faith that Dr. Steve Petrany, the chairman of this department, along with Ms. Plymale and their colleagues, will put these funds to excellent use towards research and education related to rural medicine.”

At WVU, the funds will support the research programs in Alzheimer’s disease and other neuroscience fields. BRNI recently announced a recruitment push in quantitative neurosciences that will bring bioscientists, mathematicians, physicists and engineers together to study the complex structure and function of the brain.

“These dollars will directly support our research program, and make WVU even more competitive on a national level,” said George Spirou, Ph.D., co-director of BRNI. “We are taking aim at diseases of the brain that have an impact on thousands of families in West Virginia every year, and this will push that work forward.”