Mader recognized as April Resident of the Month

Mader recognized as April Resident of the Month 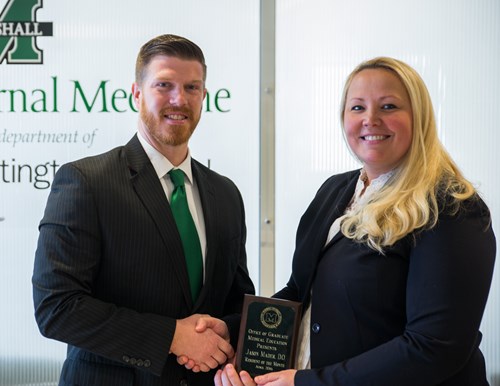 HUNTINGTON, W.Va.—Jason Palmer Mader, D.O., a third-year resident in the department of internal medicine, has been selected as the April 2016 Resident of the Month, according to Paulette S. Wehner, M.D., vice dean for graduate medical education at the Marshall University Joan C. Edwards School of Medicine.

Mader is completing his third and final year as an internal medicine resident and is also serving as chief resident.

“Dr. Mader’s nomination indicated that he has an amazing passion for making everything better around him,” Wehner said. “His passion doesn’t stop at quality improvement, but extends to teaching and patient care. Dr. Mader is a leader by example and is an inspiration to others—all reasons why he was chosen as the April Resident of the Month.”

Eva Patton-Tackett, M.D., who serves as the internal medicine residency program director, noted in her nomination that “…from the first day in our program others have looked up to Dr. Mader.… he has spent endless hours teaching and has certified countless residents in procedures.  But that isn't the important point – he did it while building their confidence all at the same time… He works with residents that might be struggling and helps them without them ever knowing they were struggling in the first place.”

After graduating from the West Virginia School of Osteopathic Medicine (WVSOM) in Lewisburg, Mader completed a preliminary surgery year at the Charleston Area Medical Center/West Virginia University Charleston Division. While at WVSOM, Mader was awarded the T.O.U.C.H. Award for completing more than 120 hours of community service in an academic year.  He also completed an undergraduate degree in biological sciences at Marshall University.

After finishing the internal medicine residency in June, Mader will begin a three-year cardiology fellowship at Marshall. As part of his recognition as the April Resident of the Month, he will receive items including a certificate of recognition and a designated parking spot.