Lycans recognized as April Resident of the Month

Lycans recognized as April Resident of the Month

Lycans is completing his last year of the five-year orthopaedics surgery residency. 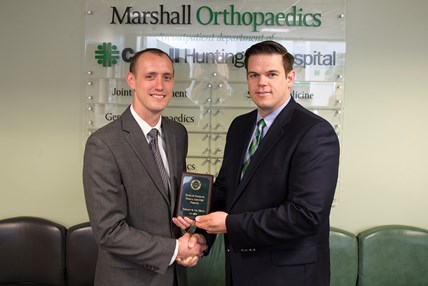 “Dr. Lycans was clearly nominated by many health care team members for his willingness to go above and beyond to make certain the patient is number one,” Wehner said.  “Fellow residents also commended Dr. Lycans for serving as a fantastic chief to their program and stated he exemplifies many of the qualities admired in a leader.”

One of his nominators indicated that Lycans’ leadership style brought positive changes to the orthopaedic program and that he took the initiative to implement his vision.  Others commented that he is known to all as someone who is very reliable and always willing to lend a helping hand.

“Dana has been a huge asset to our program,” Salava said.  “He was a phenomenal student and resident and will be an amazing addition to our faculty. No one represents us better on and off the field.”

The West Virginia native received his undergraduate and medical degrees from Marshall University.  After residency graduation in June, Lycans will enter a sports medicine fellowship at the American Sports Medicine Institute in Birmingham, Alabama, and plans return to Marshall as an orthopaedic faculty member.

As part of his recognition as the April Resident of the Month, Lycans received items including a plaque and a designated parking spot.