The luncheon, which honored employees who are celebrating milestones in years served at MU, took place in the Don Morris Room, located in the Memorial Student Center on the Huntington campus. About 450 people attended. 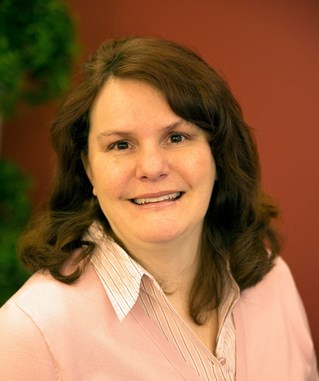 Christopher has been employed at Marshall for almost 10 years. She became eligible for Employee of the Year by being named Employee of the Month for December 2014. She was nominated for the monthly honor by Amy Smith, Assistant Dean of Student Affairs and Director of Clinical Skills for the School of Medicine, and medical students Aaron Dom and Jonathan Seibert, who nominated her on behalf of the MUSOM Class of 2015.

“This year’s Employee of the Year is a lady who I met for the first time when I gave her the (Employee of the Month) award,” White said. “As soon as I met her, as soon as I felt the atmosphere in the room when I was there to make the presentation, I certainly understood what I had read about her, and agreed with everything that had been said.”

White described Christopher as “an outstanding professional in her job,” and he praised her family for its support of her and involvement “in whatever activity” she is involved in.

Christopher said, “I’m just very lucky that I see our students (from) day one, and I’m just very lucky that I get to see them for four years. Knowing that I might play a little part in them becoming the good doctors that they’ve become is very humbling to me. I’m very proud to say that my doctor, my husband’s doctor and my children’s doctor are all School of Medicine graduates and I’d have it no other way.”

In her nomination, Smith wrote, “Mrs. Christopher is the stable force and support for student affairs in the School of Medicine.  Her outstanding performance on many large projects … often goes unnoticed.  However, her daily efforts and interactions with students and families go beyond the call of duty … she rises to the top by demonstrating dedication and attentiveness to many details involving the lives of medical students. She often involves her own family in going the extra mile by attending off-hours functions …. or serving holiday breakfasts on the weekends.

“Her infectious laugh and smile bring a positive impact on those around her. Her support, dedication, and loyalty to her role are indescribable.  She is dependable and willing to step up and help whatever the needs may be.”