Knight recognized as January Resident of the Month 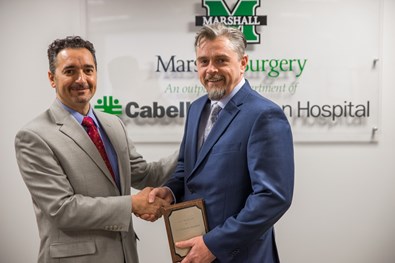 Knight is completing his fifth and final year of the surgery residency.

“It’s always a pleasure to recognize a resident who is dedicated to his or her calling,” Wehner said. “Dr. Knight is truly the epitome of the role that sheer determination and strong will play in the path to success.  We are proud of all that he has accomplished to be able to fulfill his lifelong dream and passion of becoming a surgeon in a rural community.”

A native of Hazard, Kentucky, Knight earned his medical degree from the University of Kentucky School of Medicine and completed a bachelor’s degree at Transylvania University in Lexington, Kentucky.

“Dr. Knight has done a wonderful job as a surgical resident in the four and a half years that he has been in our program,” Mozaffari said.   “This year, as the educational chief resident, he has significantly improved our lecture and conference schedules and been an integral part of the improvement that we have seen in surgical education.”

Mozaffari went on to say that Knight “is well respected by his fellow residents, trusted by faculty, and loved by all his patients.  I’m very happy to see Chad recognized for his hard work and dedication to his chosen field of general surgery.”

After completing the surgery residency in June, Knight will begin practice at the Appalachian Regional Healthcare (ARH) in Hazard, Kentucky.   As part of his recognition as the January Resident of the Month, Knight received items including a plaque and a designated parking spot.