Kim Selected as January Resident of the Month

Kim Selected as January Resident of the Month 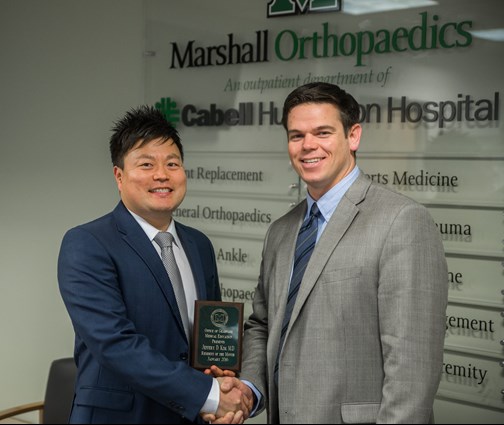 Kim is currently finishing his fifth and final year as a resident and serves as the administrative chief.

“To be nominated by nearly all the faculty of your program is truly an honor in itself,” Wehner said. “However,by having the words ‘exceptional’ and ‘outstanding’ used in nearly every nomination, Dr. Kim’s nomination is brought to the forefront.”

Frank Shuler, M.D., Ph.D., professor and vice chairman of research in the department of orthopaedics, summed up the nominations of other faculty members by writing, “…simply stated, in a specialty populated by bright and talented people, Jeff stands out as exceptional. He is respected both inside and outside of the hospital. He leads by example and the residency core, patients and staff are benefitted by his presence.”

Kim obtained his medical degree from Rush University in 2011 and holds a master’s in chemistry from the University of Colorado, where he also earned a bachelor’s degree in chemical engineering. While completing his studies, he was involved in orthopaedic surgery research and volunteered to provide health care to the residents of the largest homeless shelter in Chicago.

After completing his residency training in June,Kim is scheduled to enter a spine fellowship at Northwestern University in Chicago.

As part of his recognition of the January Resident of the Month, Kim will receive items including a certificate of recognition and a designated parking spot.

Photo Caption: Jeffery Kim, M.D., (left) is pictured with Jonathon Salava, M.D., assistant professor in the department of orthopaedics, after receiving the January 2016 Resident of the Month award.