Kheetan recognized as March Resident of the Month

Kheetan recognized as March Resident of the Month 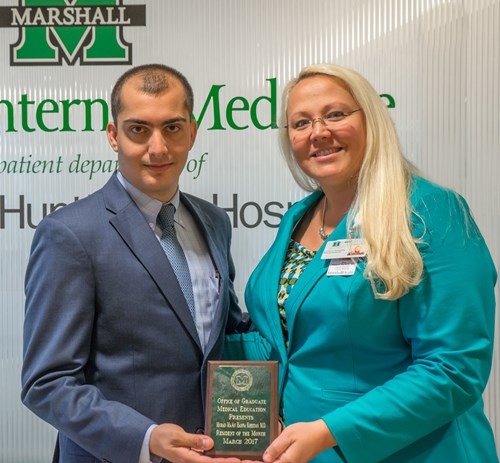 Kheetan is completing his third and final year of an internal medicine residency and serves as a co-chief resident.  Being selected as a chief resident is an honor bestowed upon a resident in the last year of training by residents and faculty.

“This month’s resident of the month was nominated by his co-chief resident,” Wehner said. “It is the first time that we had a co-chief nominate a colleague.  To have a co-chief publicly state that he has become a better person and physician because of his colleague speaks volumes.”

Jacob Kilgore, M.D., serves alongside Kheetan in both a clinical and administrative role.  In his nomination, Kilgore wrote that, “I am constantly in awe of his compassionate demeanor, insatiable desire to learn, and heart of service – be it to our residency program, supporting faculty and staff, or most notably, his patients.”

Kilgore continued saying, “Dr. Kheetan leads by example both inside and outside of the hospital, whether it’s offering to cover for a resident in need, committing countless hours towards residency development, or spending extra time with patients and their families to ensure comprehensive, compassionate, and well-communicated patient care.”

Eva Patton-Tackett, M.D., program director for the internal medicine residency, said that Kheetan has worked very hard over the past three years.

“His endless energy enables those around him to draw strength from and recharge our passion for learning and becoming better physicians,” she said.  “We sincerely hope he returns as faculty upon completion of his nephrology fellowship.”

Kheetan earned his medical degree from the Jordan University of Science and Technology Faculty of Medicine.  After completion of his residency in June, Kheetan will enter a two-year nephrology fellowship at the University of Alabama.  Nephrology is the study of kidney care and treating diseases of the kidneys.

As part of his recognition as the March Resident of the Month, Kheetan received items including a plaque and a designated parking spot.

Photo Caption: Murad Ma’A Hanna Kheetan, M.D., (left) is named the March Resident of the Month at the Joan C. Edwards School of Medicine.  He is pictured with program director Eva Patton-Tackett, M.D.