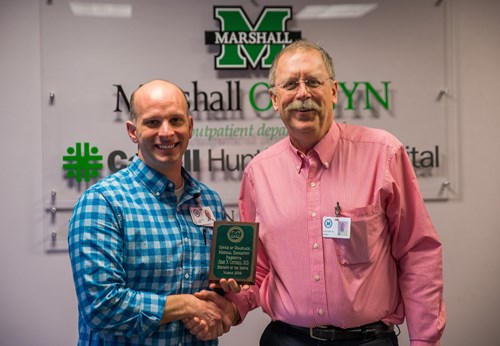 HUNTINGTON, W.Va.— Jesse N. Cottrell, M.D., a resident in the department of obstetrics and gynecology, has been selected as the March 2016 Resident of the Month, announced Paulette S. Wehner, M.D., vice dean for graduate medical education at the Marshall University Joan C. Edwards School of Medicine.

Wehner said the southern California native was nominated for the award, in part, for his outstanding demeanor.

“Dr. Cottrell’s nomination reflects a truly remarkable individual,” Wehner said.  “His integrity as well as his studious, dependable and mature nature along with his team mentality were characteristics highlighted by those nominating him.  Everyone commented that he will be a wonderful credit and valuable resource to his chosen field of obstetrics and gynecology.”

Cottrell received his medical degree from the American University of the Caribbean School of Medicine.  He received a master’s degree in theology from the Talbot School of Theology in La Mirada, California and earned a bachelor’s in biological sciences from the Master’s College in Santa Clarita, California.

After completing his residency in June this year, Cottrell will enter into a maternal-fetal medicine fellowship at the University of Mississippi Medical Center.   Maternal-fetal medicine is a three-year fellowship in the diagnosis and management of special and complicated pregnancies caused by high blood pressure, diabetes and other maternal disorders or diseases.

As part of his recognition as the March Resident of the Month, Cottrell will receive items including a certificate of recognition and a designated parking spot.