HUNTINGTON, W.Va.—Jacob T. Kilgore, M.D., a second-year internal medicine/pediatrics resident, has been selected as the April 2015 Resident of the Month. 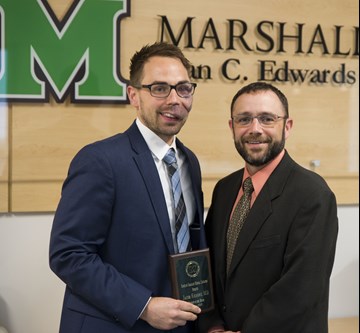 “To watch Jacob mature from a student to an outstanding resident is one of the most rewarding things an academic clinician can experience,” said Paulette S. Wehner, M.D., vice dean, graduate medical education at the Marshall University Joan C. Edwards School of Medicine.“He is truly a remarkable and caring young physician and respected by all.”

Kilgore was nominated by Shelia McCallister, who works in the department of internal medicine.

“The many occasions I've had to interact with Dr. Kilgore have proven him to be most engaging at every level: medically, personally and compassionately,” McCallister said. “I, as well as immediate family members, have received care from Dr. Kilgore and have had the opportunity to personally assess his capabilities.”

A native of Wayne County, Kilgore is a 2013 graduate of the Marshall University School of Medicine, where he was inducted into the Gold Humanism Honor Society and the Alpha Omega Alpha Honor Medical Society, as well as being recognized for his academic achievement and community service.

He is an active participant in the MUSOM Global Medical Brigade, Christian Medical Association and the Marshall Medical Outreach Program.   As an undergraduate student at Marshall University, Kilgore studied in Madrid, Spain, and in Oxford, England.

As part of his recognition of the April Resident of the Month, Kilgore will receive items including a Certificate of Recognition and a designated parking spot.Monthly winners will also be automatically entered into the Resident of the Year Award to be announced in May.