Jace Smith, M.D., selected as November Resident of the Month 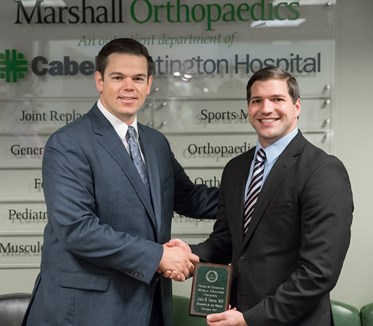 Smith was nominated by numerous orthopaedic staff, attending physicians and others, most of whom stated he deserved the Resident of the Month Award “for just being Jace.”

“It became apparent real fast that Dr. Smith is highly regarded throughout the orthopaedics department and Cabell Huntington Hospital,” Wehner said. “Nearly all nominations commented on his knowledge, compassion and empathy. It was also widely noted that Dr. Smith serves as an excellent role model for younger residents and medical students.”

“I have not met a more genuinely caring person, and I’m not alone in being impressed,” Salava said. “Staff, patients, and their families regularly comment on how helpful and thoughtful he is.”

The University of Tennessee Health Sciences Center graduate is completing his fifth and final year as an orthopaedic surgery resident.  After graduation in June, Smith will begin a sports medicine fellowship at the Mississippi Sports Medicine and Orthopaedic Center. He also earned an undergraduate degree in animal science with a minor in biology from the University of Tennessee.

As part of his recognition as the November Resident of the Month, Smith received items including a plaque and a designated parking spot.