HUNTINGTON, W.Va. – Four physician brothers have established an endowed scholarship at the Marshall University Joan C. Edwards School of Medicine in honor of their parents. 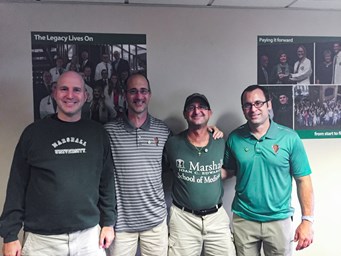 Dr. Charles Anton was a practicing radiologist with Radiology, Inc., in Huntington from the late 1960s until his retirement in the late 1980s. Mary Louise Anton was actively involved in the Huntington community.

"As native Huntingtonians, Marshall University and the School of Medicine were always part of our life—and part of our family, in a way,” John Anton said on behalf of the four brothers. “While growing up, our parents stressed the importance of charity and community. We believe that endowing this scholarship is the least we can do, and there is no better way to honor our parents who gave so much to Marshall University and the Huntington community.”

After Charles Anton retired, the couple moved to Hilton Head, South Carolina, where they still reside.

The scholarship, known as the Dr. Charles Joseph Jr. and Mrs. Mary Louise Anton Scholarship, is designated for first-year medical students. First preference will be given to Huntington and/or Cabell County residents; second preference will be given to students who are residents of West Virginia. The award is renewable for three additional years pending normal academic progress.

The sons noted their father’s enjoyment from his interactions with medical students and residents through the many stories he’s shared.

“We saw Dad’s sense of purpose and made it our own as we matured into young doctors, each of us graduating from the Marshall School of Medicine,” John Anton said. “Every day, we now see the impact of the School of Medicine and its alumni. We see it in the good work that we do and witness its positive impact on families and the community.”

For more information on the scholarship or to make a gift to the Marshall University Joan C. Edwards School of Medicine, please contact Linda Holmes, director of development and alumni affairs, at 304-691-1711 or go to www.jcesom.marshall.edu/alumni.

Photo caption: (From left) Drs. Christopher, John, Robert and Michael Anton, all graduates of the Marshall University Joan C. Edwards School of Medicine, have established a scholarship at the school in honor of their parents. The Dr. Charles Joseph Jr. and Mrs. Mary Louise Anton Scholarship is designated for first-year medical students.