HUNTINGTON, W.Va. —  Farzad Amiri, M.D., a second-year surgery  resident at the Marshall University Joan C. Edwards School of Medicine, has been selected as the August 2015 Resident of the Month. 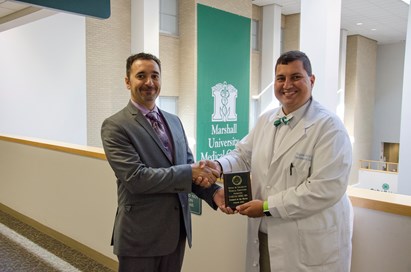 Amiri is a 2012 graduate of the American University of the Caribbean School of Medicine and completed his student clinical training in the United States.  He earned two bachelor’s degrees – one in chemistry and the other in biology – from Florida Atlantic University in Boca Raton,Florida.

As part of his recognition as the August Resident of the Month, Dr. Amiri will receive items including a Certificate of Recognition and a designated parking spot.

Photo Caption:  Farzad Amiri, M.D., right, is congratulated by Farid Mozaffari, M.D., director of the surgery residency program, on being selected as Resident of the Month for August.