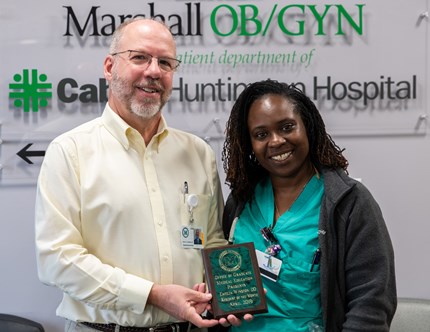 Winston is completing her third year of the four-year obstetrics and gynecology residency at Marshall. She was nominated for Resident of the Month by her fellow residents for her leadership, teaching ability and exceptional knowledge.

“Recognition of a resident for an exceptional job is one of my favorite things to do as vice dean of graduate medical education,” Wehner said. “The award becomes truly special when residents nominate one of their own. This month’s awardee is appreciated by her junior residents for her ability to remain calm in chaotic situations and taking teaching moments despite the incredible stress associated with the delivery and operating rooms.”

Born in New York and raised in northern Virginia, Winston earned her medical degree from the Lincoln Memorial University - DeBusk College of Osteopathic Medicine in Harrogate, Tennessee. She received her undergraduate degree from George Mason University in Fairfax, Virginia.

“Dr. Winston has been a wonderful addition to our program,” said Kevin J. Conaway, M.D., residency program director for obstetrics and gynecology. “She is an excellent physician and a great example for our junior residents. This award is well deserved.”

In her letter of support for Winston’s nomination, first-year obstetrics and gynecology resident Katherine Addicott said, “She is an outstanding senior resident, and I am lucky to have the chance to work with her. During my first month of night float, I was very nervous to start. Dr. Winston did a great job helping me organize my time and definitely made me more efficient over the course of the month.” Addicott continued, “She is one of the only people I know who can remain calm in the most chaotic of shifts.”

Winston is interested in joining a group practice upon completion of her residency in 2020. Winston has been a member of the Army National Guard since 2001, where she serves as a field grade medical officer. She is married with two daughters, ages 14 and 13.  In her spare time, she likes to travel.  As part of her recognition as the April Resident of the Month, Winston received a plaque and designated parking spot.