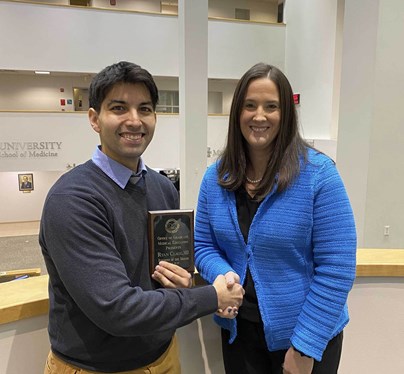 “Our January awardee was nominated by a spectrum of people—from clinical care team members and colleagues to attendings,” Wehner said. “He was consistently nominated for his ‘above and beyond’ approach to patient care and his compassionate nature. He was also touted for being a true patient advocate, which is the ultimate compliment.”

Clagg is completing his fourth and final year of his combined medicine-pediatrics residency at Marshall. The Barboursville native graduated from Cornell University in Ithaca, New York, with a double major in biology and film. He received his medical degree from the Marshall University Joan C. Edwards School of Medicine.

“Dr. Clagg is an excellent role model to his fellow residents and delivers truly outstanding and empathetic patient care,” said Elizabeth Saunders, M.D., medicine-pediatrics program director and an assistant professor of medicine and pediatrics. “As his program director, I have been impressed not only with his exceptional patient care and leadership qualities but with his willingness to give back to our community during his training.”

Clagg is a frequent volunteer at Cammack Children’s Center, where he supervises comedy writing workshops for youth as a form of expressive therapy.

“We are extremely proud of Dr. Clagg’s work not only clinically but also in our community as well,” Saunders said.

As part of the recognition as the January Resident of the Month, Clagg received a plaque and designated parking spot. After graduation in June, Clagg plans to practice primary care in the Los Angeles area.