HUNTINGTON, W.Va. – Paul B. Ferguson, M.D., chair of the department of neurology at the Marshall University Joan C. Edwards School of Medicine, and his wife, Allison, have generously pledged to fund an endowed scholarship at the school.

“I continue to be thankful to our graduates and department chairs who are supporting our medical students through scholarships,” said Joseph I. Shapiro, M.D., dean of the School of Medicine. 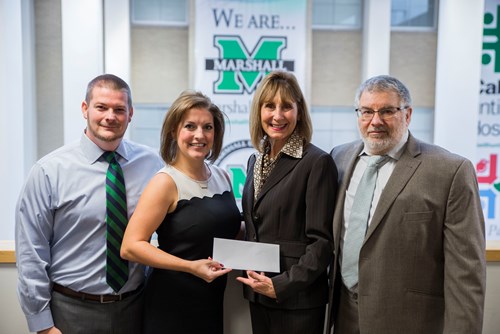 Ferguson, a 2007 graduate of the Marshall School of Medicine, is a Mercer County, West Virginia, native and a graduate of West Virginia Wesleyan College. He completed his residency in neurology at Wake Forest Baptist Medical Center in Winston-Salem, North Carolina, before returning to West Virginia. Ferguson specializes in treating multiple sclerosis. He and Allison reside in Proctorville and have two daughters, Emily and Audrey.

“As a graduate and the chair of the department of neurology, he embodies loyalty and leadership by creating this endowment,” said Linda S. Holmes, director of development and alumni affairs for the School of Medicine.  “He leads by example.”

The scholarship, established through the school’s Adopt a Medical Student program, is known as the Dr. Paul and Mrs. Allison Ferguson Scholarship. It is designated for first-year medical students at Marshall who are residents of West Virginia, with first preference given to graduates of West Virginia Wesleyan College. The scholarship is renewable for three additional years, pending normal academic progress.

The first recipient of the Dr. Paul and Mrs. Allison Ferguson Scholarship is Jordan Tate, a first-year medical student and graduate of West Virginia Wesleyan College.

"I am so appreciative of my education and the opportunities given to me and my family by the School of Medicine.  It has always been a high priority for Allison and me to give back and support the next generation of physicians," Ferguson said.

For more information on the scholarship or to make a gift to the Marshall University Joan C. Edwards School of Medicine, please contact Linda Holmes at 304-691-1711 or go to www.musom.marshall.edu/alumni.