Caughran recognized as February Resident of the Month

Caughran recognized as February Resident of the Month 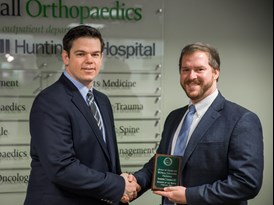 Caughran is completing his fifth and final year of an orthopaedic surgery residency.

“This month’s Resident of the Month was nominated by many faculty members who personally attested to Dr. Caughran’s maturity as a surgeon and as a teacher during the past five years,” Wehner said. “It is always a pleasure to recognize a resident who loves to teach and approaches teaching as an opportunity to share his knowledge and skill in a nurturing manner.”

A native of Tennessee, Caughran earned his medical degree from the University of Tennessee where he was awarded the George E. Bradford Merit Scholarship.  He completed a bachelor’s degree in chemistry at Furman University in Greenville, South Carolina.

”We knew from the beginning that Dr. Caughran’s fund of knowledge was tremendous, but it has been in these last few months in his capacity as chief resident that we have truly seen his capability, ”  said Jonathon Salava, M.D., orthopaedic surgery associate residency program director. “We, as faculty, strive to make our residents better surgeons than even ourselves.  I have seen Alex teach junior residents with that same goal in mind.  Although every resident is excited for an opportunity to operate and be handed the knife, I have seen Alex ‘give up the knife’ for an opportunity to teach.”

After completing the orthopaedic surgery residency in June, Caughran will begin a joint arthroplasty fellowship at the Rubin Institute at Sinai Hospital in Baltimore, Maryland.

As part of his recognition as the February Resident of the Month, Caughran received items including a plaque and a designated parking spot.