Al Zoby recognized as September Fellow of the Month 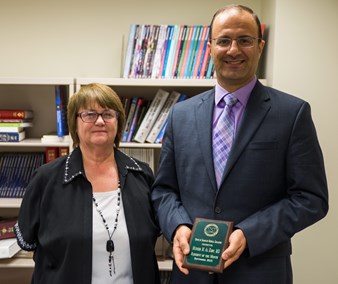 “Years ago, patients may have been cared for by a single doctor, but as the field of medicine changes to a team approach, working well as part of the medical team is imperative to a successful practice in medicine,” Wehner said.   “This month’s Resident-Fellow of the Month was nominated for helping out another physician who had two patients coding at the same time.  Dr. Al Zoby went above and beyond the call of duty working aggressively to assist and stabilize the patients with the other physician.  That’s what the field of medicine is all about – working as a team to save lives.”

In his nomination letter, cardiology fellow David Francke, M.D., wrote, “… on two occasions in the middle of busy night calls, Dr. Al Zoby has helped me immensely without [my] having to ask…. In all of my dealings with him, he has demonstrated teamwork at its finest.  He sets a great example to his peers on how to efficiently and effectively manage patients in an interdisciplinary setting.”

Al Zoby completed an internal medicine residency at St. Elizabeth Health Center in Youngstown, Ohio, where he was recognized as Resident of the Year, Resident Researcher of the Year and Best Intern.  He previously served as Chief of Medicine and as hospitalist program director at Our Lady of Bellefonte Hospital in Ashland, Kentucky.

Al Zoby graduated from the University Of Aleppo Faculty Of Medicine in 2000 and also completed an internal medicine residency in Syria.

As part of his recognition as the September Resident-Fellow of the Month, he will receive items including a certificate of recognition and a designated parking spot.